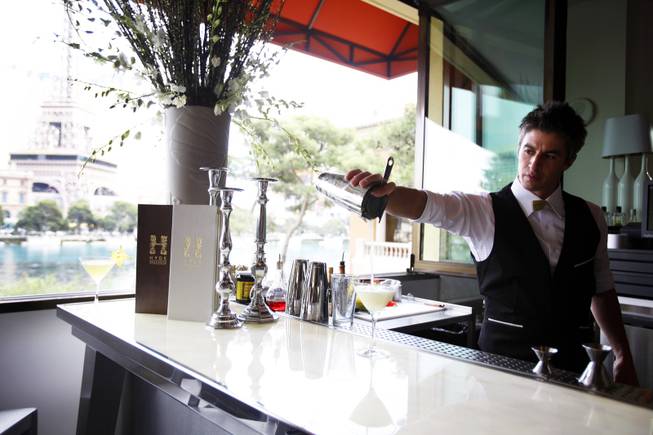 The new club is one of three debuting for 2012. 1 OAK at the Mirage also opens New Year’s Eve, and RPM Nightclub at the Tropicana opens Friday.

“This whole club is a paradigm shift,” SBE’s Food and Beverage Vice President Oliver Wharton said. “Where clubs have gotten bigger and louder, we wanted to go back to luxury, sophistication and hospitality.”

Hyde is modeled after a high-end Italian villa. Books and framed photos decorate shelves. A room divider features an oversized image of a staircase. The DJ booth doubles as a fireplace.

The club includes both indoor and outdoor seating and overlooks the Bellagio’s famed dancing fountains.

In an effort to attract a more diverse audience, Hyde will feature a few novelties. Up-and-coming DJs from Los Angeles will spin every Tuesday night, waiters will serve tapas and small plates, and the music will start cranking as early as 5 p.m. The club’s specialty drinks center on fresh-squeezed juices (think cucumber-watermelon margaritas), and bartenders are trained in using liquid nitrogen to make cocktails slushy.

“The 28- to 55-year-old crowd is going to be checking out earlier spots. That’s why the day clubs have been so successful,” said Michael Fuller, a programming consultant for SBE. “If you have been going to clubs for a while, you’re probably bummed out on the late-night scene.”

Cancel reply
PAST AND PRESENT

Movingsun places great emphasis on owner/partner relationships and views these with both longevity and sustainability in mind, building a foundation of trust and interactive cooperation. It further brings to the project a team of industry professionals with extensive world class attraction, hospitality, entertainment, food and beverage, and retail experience perfect for any initiative large or small.

HERE TO SERVE YOU

Movingsun has affiliates in Miami, Las Vegas and San Francisco. Our focus is presently based in the United States. Hit us up to schedule a video conference or face to face meeting.